It all started sometime during the late summer of 2009. Kris asked me if November 14th was a day that was free because he’d looked on my gmail calendar and it looked like the next available day that I didn’t have something planned. He said that it was date night and he got that day.

He has set up date nights in the past, so that was nothing unusual.

The week before the 14th something came up with Flying Paws and I asked him if the 14th was date “night” or date “day” and he said it was the whole day. No big deal so the club just canceled practice for the day.

The 14th dawned like any other day, we slept in a bit, had a leisurely breakfast and then afterwards we sat on the couch, Kris alternating between watching TV and playing on his cell phone, I was reading my new book. At about 11:30am he says that in 15 minutes we’re leaving for lunch. I asked him if I should change because at that time I was wearing jogging pants and a baggy shirt. He did say that shoes would be needed.

So 15 minutes later we get in the car and I’m just going with the flow of things. He turns down Liberty Dr which does not have any restaurants except Steak and Shake on it, so I figured he’s going some round about way to another restaurant. (He’s done that before too)

He pulls into the parking lot of Hair Techniques which is where I’ve gotten several massages before. I asked him if we were getting massages and he said one of us was. I asked what he was going to do and he replied that he’s got some errands to run.

So Marissa greets me and we walk back to the massage rooms. She asks if I had any idea what was going on today and I said no. She replied that I was not only going to get a massage, but that other services were to occur as well. So I got an hour long massage and she told me that after the massage, I was going to shower in their shower and then get my hair done.

So after the massage I go in to the room adjoining the massage room and hanging on the back of the door was my black dress from home, my white shawl that goes with it and the red scarf I wear around the waist. There was also a bag with clean clothes, shoes and jewelry. I thought to myself, I guess we’re going somewhere fancy tonight!

After the shower I put on my robe that had been brought from home and walked out for my next “service”. Marissa turned me over to Alicia who stated that first we were going to start with color and while that was setting, I would order lunch from O’Charleys and they would go get it. So I asked if I could have blonde and red highlights and off we went. The salad from O’Charleys was huge! And tasty. I also got my hair cut (which it needed) and then from there I got a manicure and a pedicure. I had her style my hair straight because Kris likes it like that. After the pedicure I put on my dress and shoes so that the makeup could “align” with the outfit.

Once the pedicure was over they did my makeup as well. It was at this time that Kris arrived and he was wearing his suit and carrying a bouquet of red roses. When he arrived, Glenda, the owner of Hair Techniques came over and said that they needed to do more with my hair. That it needed more glam and so once Alicia was done with the makeup, to come back to the chair and both she and Alicia will work on my hair. So the two of them had curling irons and hairspray going and “glammed” up my hair some more. It came out very cute and Kris loved it, which is good. During the hair “redo” Glenda was saying, oh he’s so gonna ask. I said no he’s not. She said she really thought he was. I told her she didn’t know him like I do and that he doesn’t believe in marriage.

So once they were done, Kris handed me the roses and we walked out. Outside was a stretch limousine waiting for us! I looked at him and was like, “what’s the occasion?”. He said he just wanted to spoil me. Inside the limo were more roses in all the corners and a bottle of wine for us to drink. He wouldn’t tell me where we were going but once on the road I realized it was Indy. At one point during the ride he told me we were going to a hotel. <shaking head> Silly man.

Turns out we were going to the Eagle’s Nest, which is a restaurant at the top of a hotel that rotates. So as you eat dinner, you get to view the skyline of Indianapolis.

The whole ride up and at the table he kept commenting on how cute my hair was and how beautiful I was. So during dinner, I told him he was getting really sappy. I’m glad he took that comment well because I didn’t mean it in a bad way, but the comments and such were getting a bit much I guess. He requested that he get two more sappy moments. The first, he reached across the table, took my hands in his and said, “You know I love you right?”. I said yes, I do. We stared into each other’s eyes for a bit and then he released my hands and said ok, that was one.

We ordered wine and dinner and he said to be sure and save room for dessert. This was a bit odd because he’s not a dessert person but I didn’t dwell on it at all. Dinner was fabulous and the sun set as we rotated around Indy. We ordered a dessert to share and also a dessert coffee to share.

When the waiter arrived with the dessert, he set down the dessert, then the coffee, then placed a single red rose in front of me. I thought aw, how sweet, as I picked it up. Pinned inside the rose was a beautiful, shiny ring! I was shocked. In my head or outloud, I’m not really sure, I remember thinking/saying “Oh my god, seriously?” then I looked up at him and said “Of course!” I took the ring out of the rose and placed it on my finger. The waiter said congratulations and then walked away. Kris was smiling from ear to ear, I must have split my face open with how big mine was. After a minute of staring at the ring and then at him, he says, “Ya know, you haven’t actually said yes yet”. So I replied with “Well techniquely you haven’t actually asked!”. So he gets up and kneels down next to me and asks me to marry him. I said yes of course.

So we finish our dessert and he tells me that he wants to tell our parents and family first. So I sent Kat a picture of the ring on my hand while he went to the restroom. After that the chef and the manager came over to congratulate us. It seemed like a string of employees coming by to congratulate us, it was very cool. 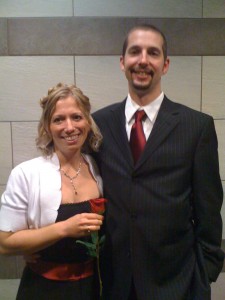 After dinner we were in the elevator with another couple and they asked if they just witnessed a proposal. We said yes and they congratulated us and said they were celebrating their 6th wedding anniversary.

Next we went on a carriage ride around Indy. The two of us snuggled up under a blanket with some holiday lights up in certain places. We went down by the canal and had a lovely ride.

For the limo ride home, we had champagne and once we were dropped off, we carried all our stuff into the house. I noticed that the bedroom door was shut, which is odd because that’s usually where Kota and Shadow spend the day when we’re not home. I began putting the roses in some water and arranging them while Kris took pictures of my hair. Once I had them arranged, he asked if I was ready for the final surprise.

He took me by the hand and we walked to the bedroom. Upon opening the door I am greeted with the sight of many tea light candles placed on tables around the bed with roses crossed in between, silk sheets on the bed with a single rose on my pillow. It was a memorable night and one of fairy tales and happy ending movies. Never in a million years did I think I would be on the receiving end of a day like that. 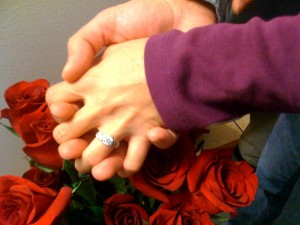 And there, I have finally recorded The Proposal.