I am trying to make different choices this year.

First I started with a lot less drinking and snacking. I am down 10 pounds and seem to be stabilizing there which is ok by me!

Next is to do more fun things with the dogs and less long trial days. This one is harder.

I start looking at the trials coming up and want to enter both days. Or enter two trials in a row. Because despite not enjoying the early mornings that much, I do enjoy the thrill of stepping to the line to tackle a new course. The accumulation of titles and seeing what kinds of times we can lay down. I don’t really enjoy having to cheerlead Twitch around the course though.

May is already full though we could plan a hike on one weekend.

June I am currently planning one trial and one conformation show.

See? Not enough weekends for all the fun things!

Playing agility with my dogs.

Hiking with my husband and the dogs. 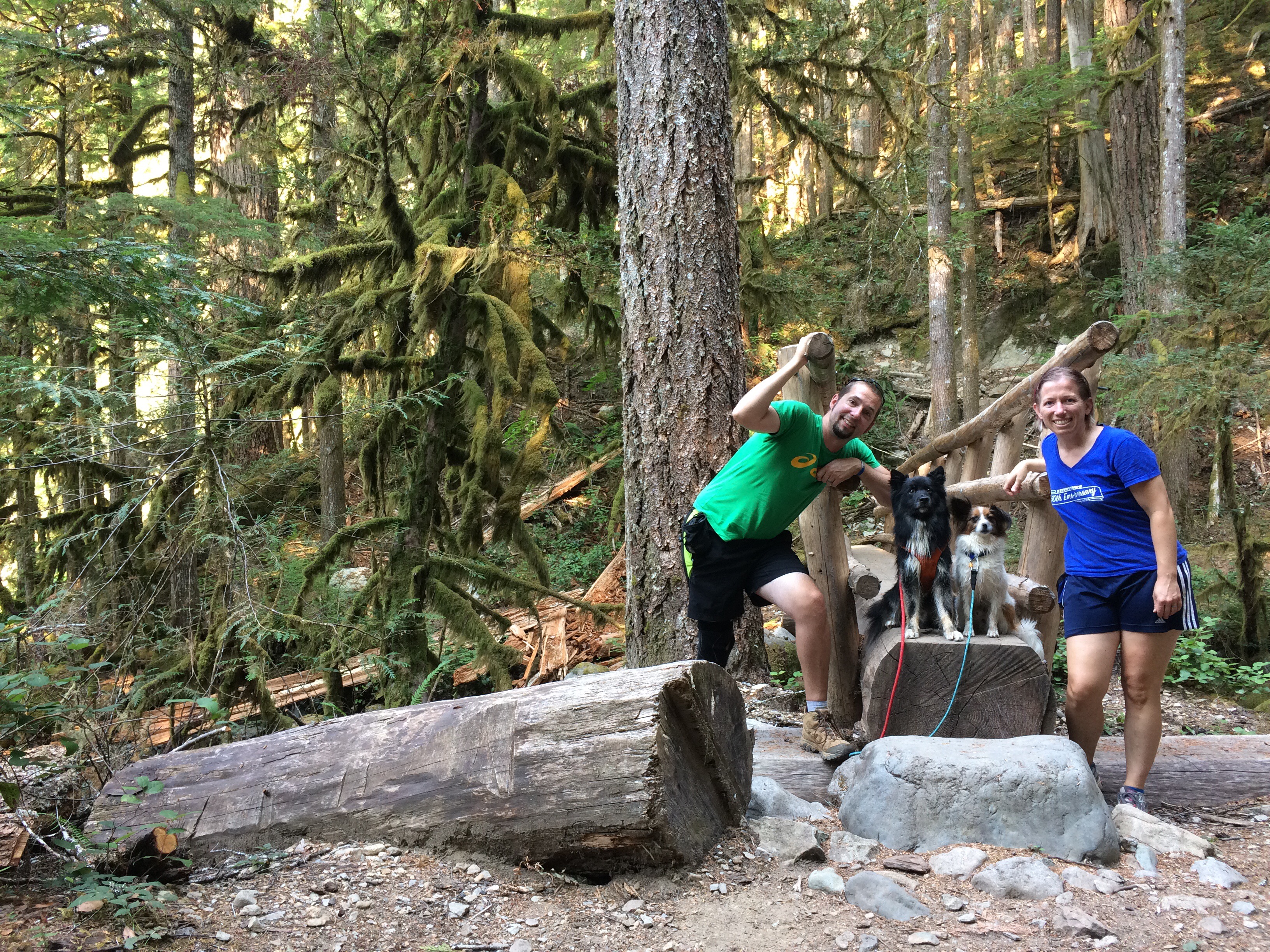 Letting my dogs play in the water.

Sitting outside on a warm summer night enjoying the company of good friends and family.

?I’m so lucky that this weekend will include all of these.

This summer has been tough. New house, new bills and new projects. I’ve struggled mentally a number of times and today I feel rejuvenated.

So today I took a sick day. I took a day to address my mental health. I have been distracted at work and having trouble focusing. I hope this helps. 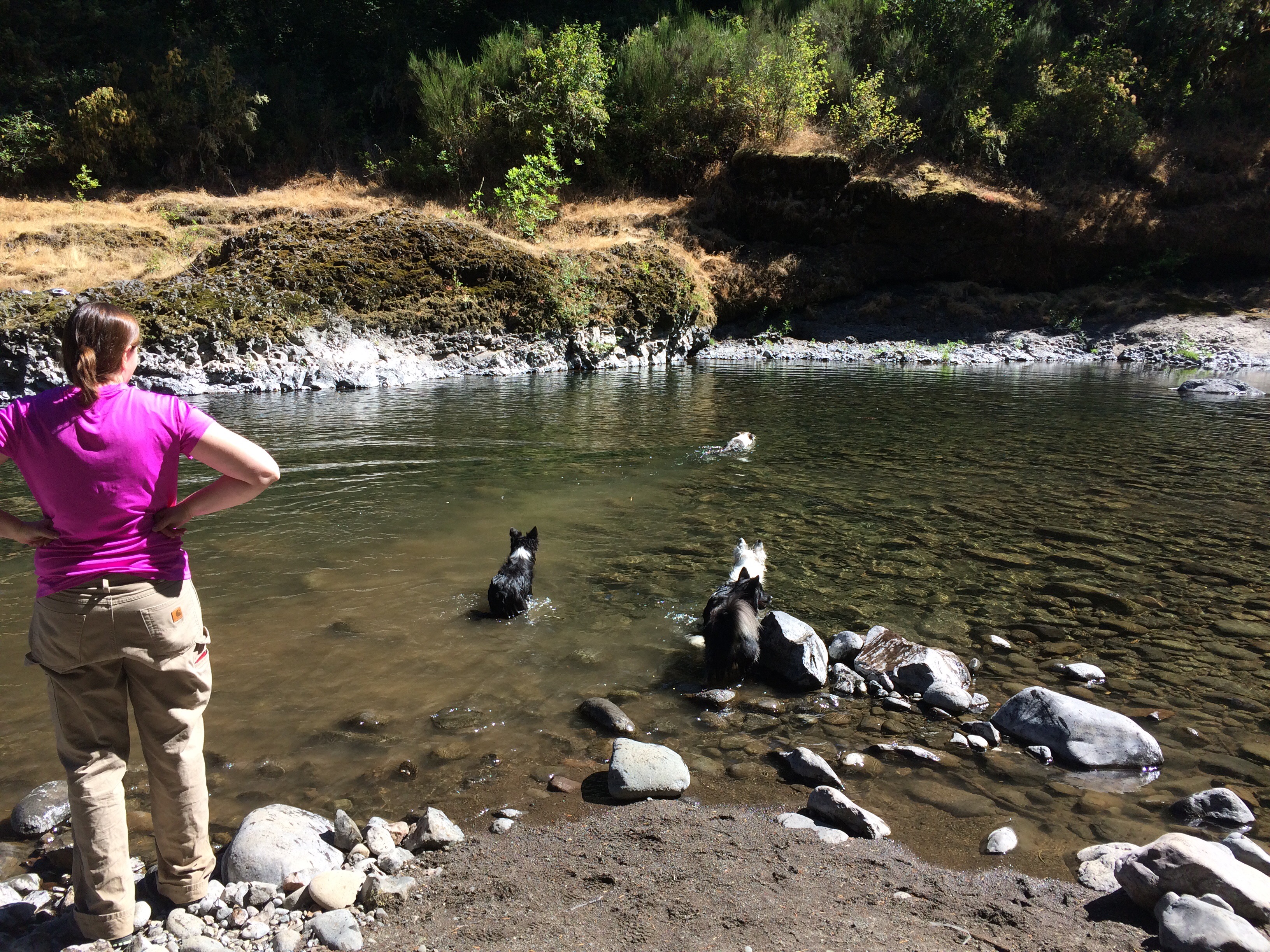 I met up with a friend and her dogs and she took me to a place not frequented by others. The dogs got to run and play off leash. We got to chat and absorb nature. At the end, the dogs got to swim and Vader even voluntarily swam after sticks. He is growing up! 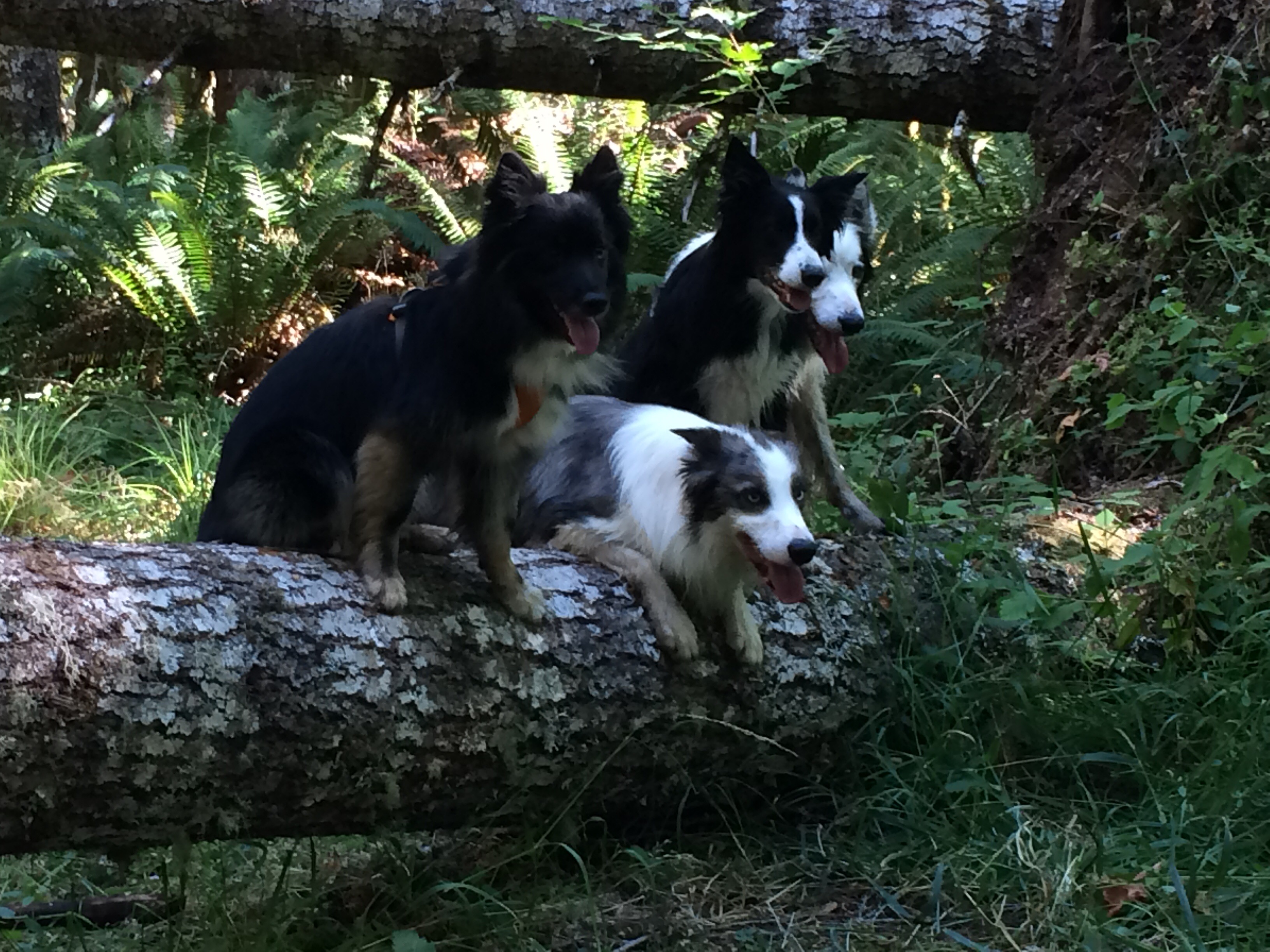 Two more trips to Three Pools for my photo project. Started in Feb this year and have gone every other month since to take pics in the same spots.

We went on Saturday and Jason came along with us. We left early to hopefully beat everyone else out there and we did. The lot was empty when we arrived! We cleaned up some trash first at the lower pools and then I shot my photos. There was no one else there so we let Twitch run around off leash which he enjoyed.

Then we walked up the trail, stopped in a few spots for more pictures and then finished at the upper pool. We picked up more trash and then decided to cross the river to the other side. I finally got to be in the most magical place ever! It’s like it was built in Disney or something it’s just so magical. As if it could only exist in a fairytale! Gentle streams flowing around and over moss covered rocks. Beautiful!

Before we even crossed the river I turned around to check on Twitch and he was wet! He had either fallen in or jumped in. After we crossed over this, one pool had pine needles floating on the surface. Twitch was catching up to me and decided he would take a shortcut over the needle covered “ground”. The look on his face when he found himself belly deep in cold water was priceless!! I wish I had snapped a pic of it but I was laughing too hard.

He also decided that the white water needed to be controlled and I do have a few pics of him trying to bite the water. Lower jaw submerged and all!
We walked all the way down to the first location but on the opposite side of the river. I had never been on that side of the river before. It is so neat to see how the water has carved out the rocks.

We picked up more trash and then left. By that time several groups had begun to arrive so we didn’t have the place to ourselves anymore.

Next we headed to Opal Creek for a hike. I thought it was 3 miles but it was 6! Oops. It was gorgeous and we found some neat new spots.

This spot looked like a natural water slide the way the water carved a path down the rocks. 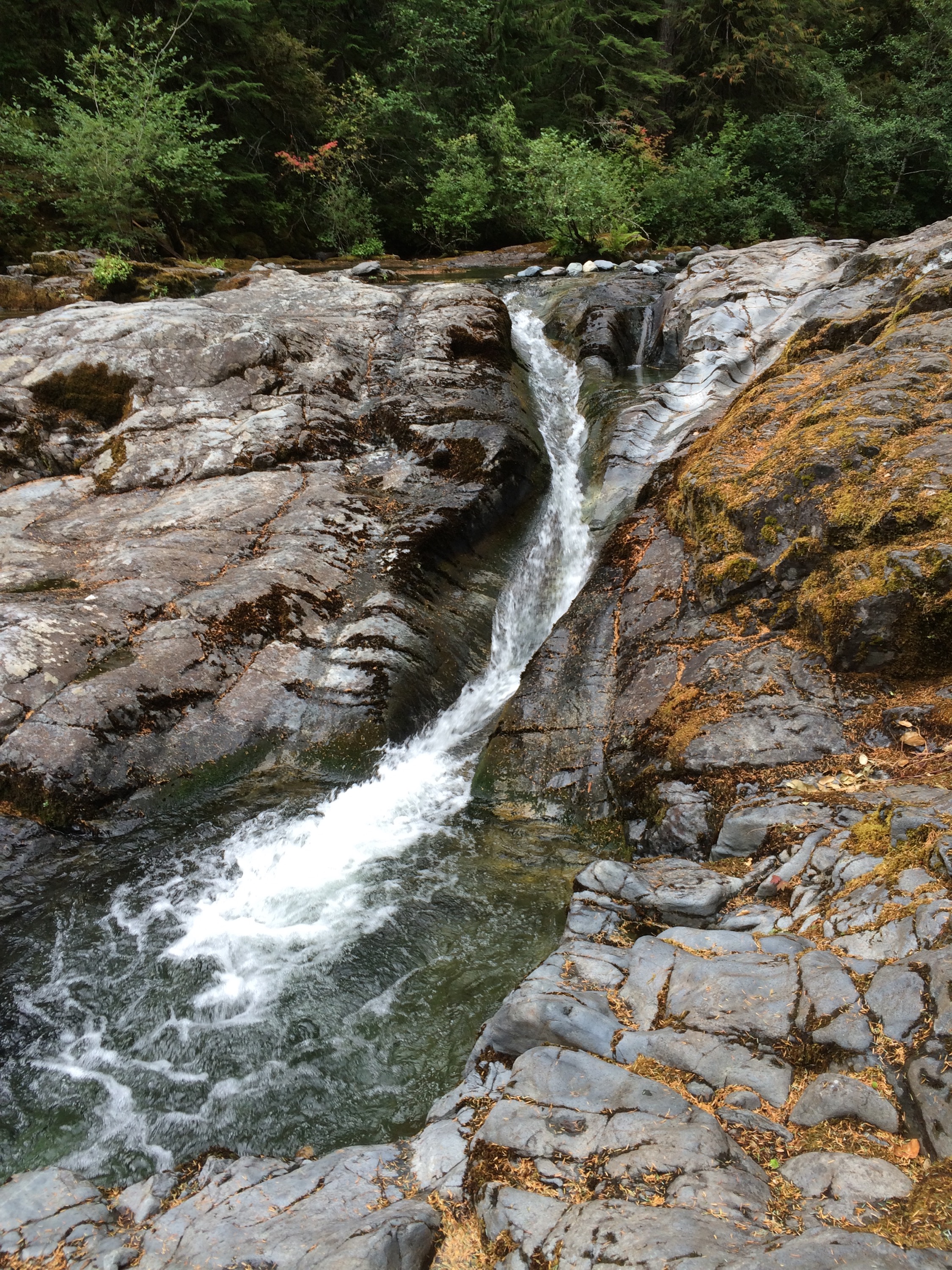 The water is so clear up there! 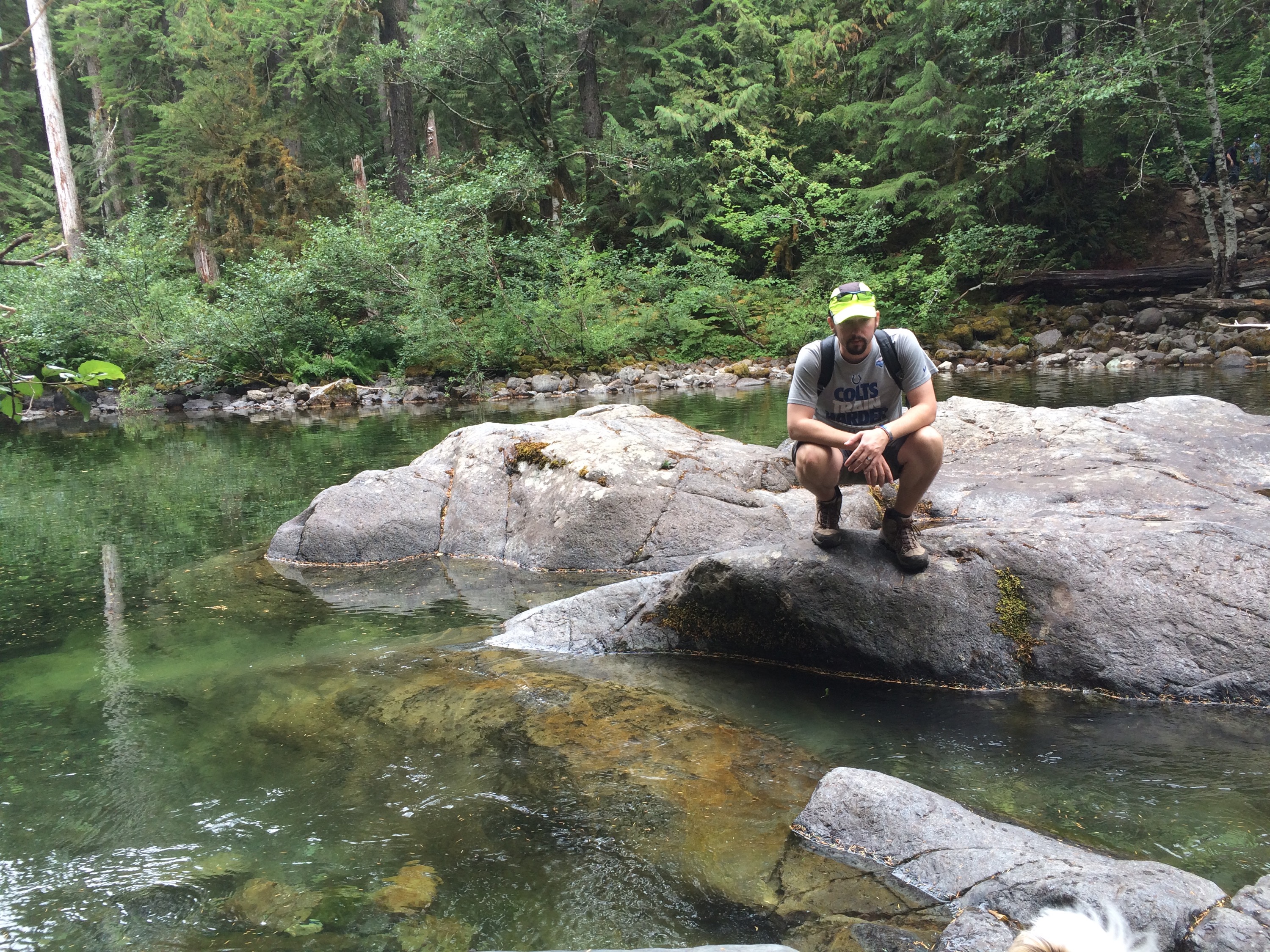 This little wave was fun! Hard to tell in the pic but it blasts up about a foot from the surrounding rock. 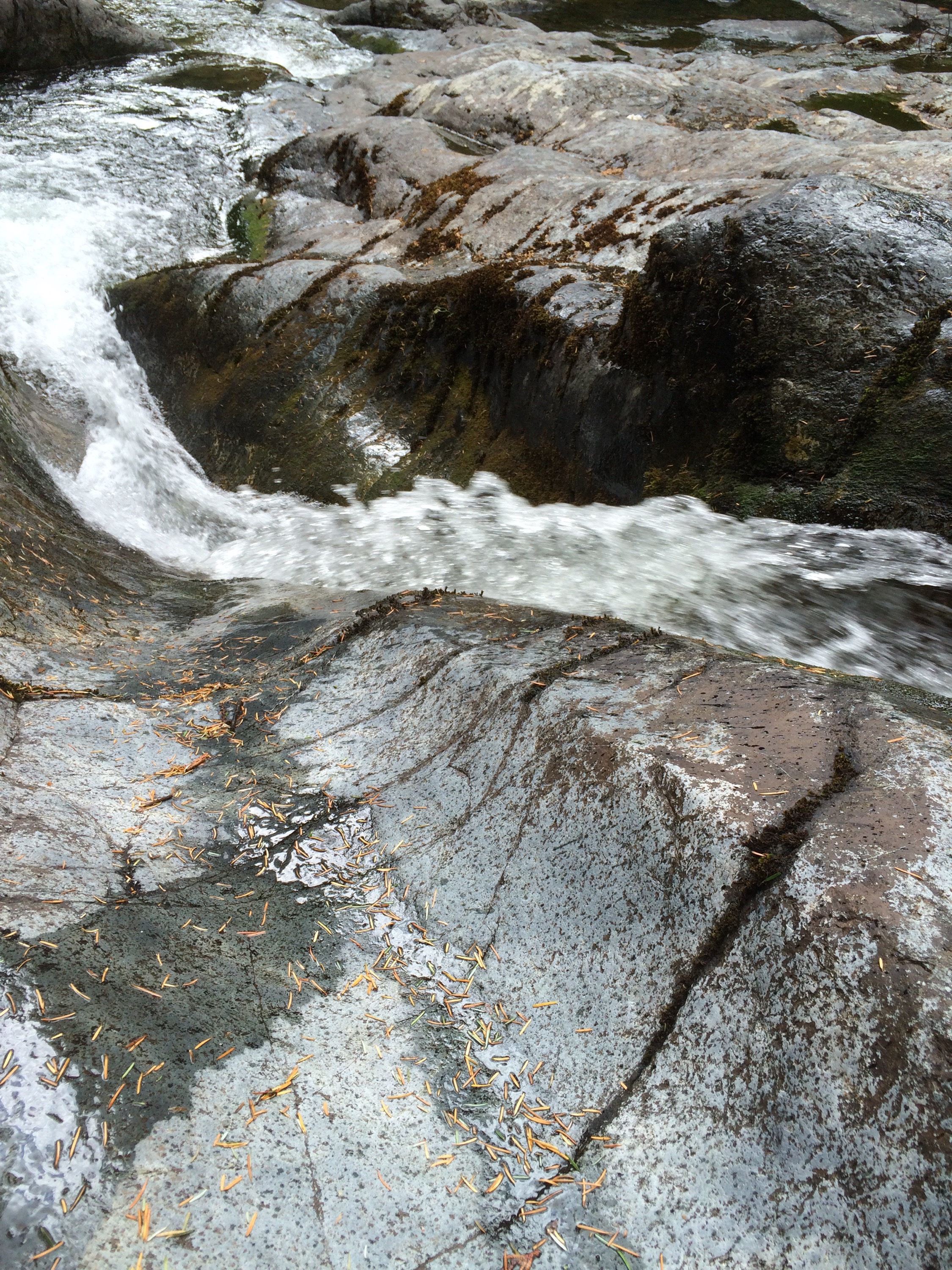 This is the canyon leading into Opal Pool up near Jawbone Flats. 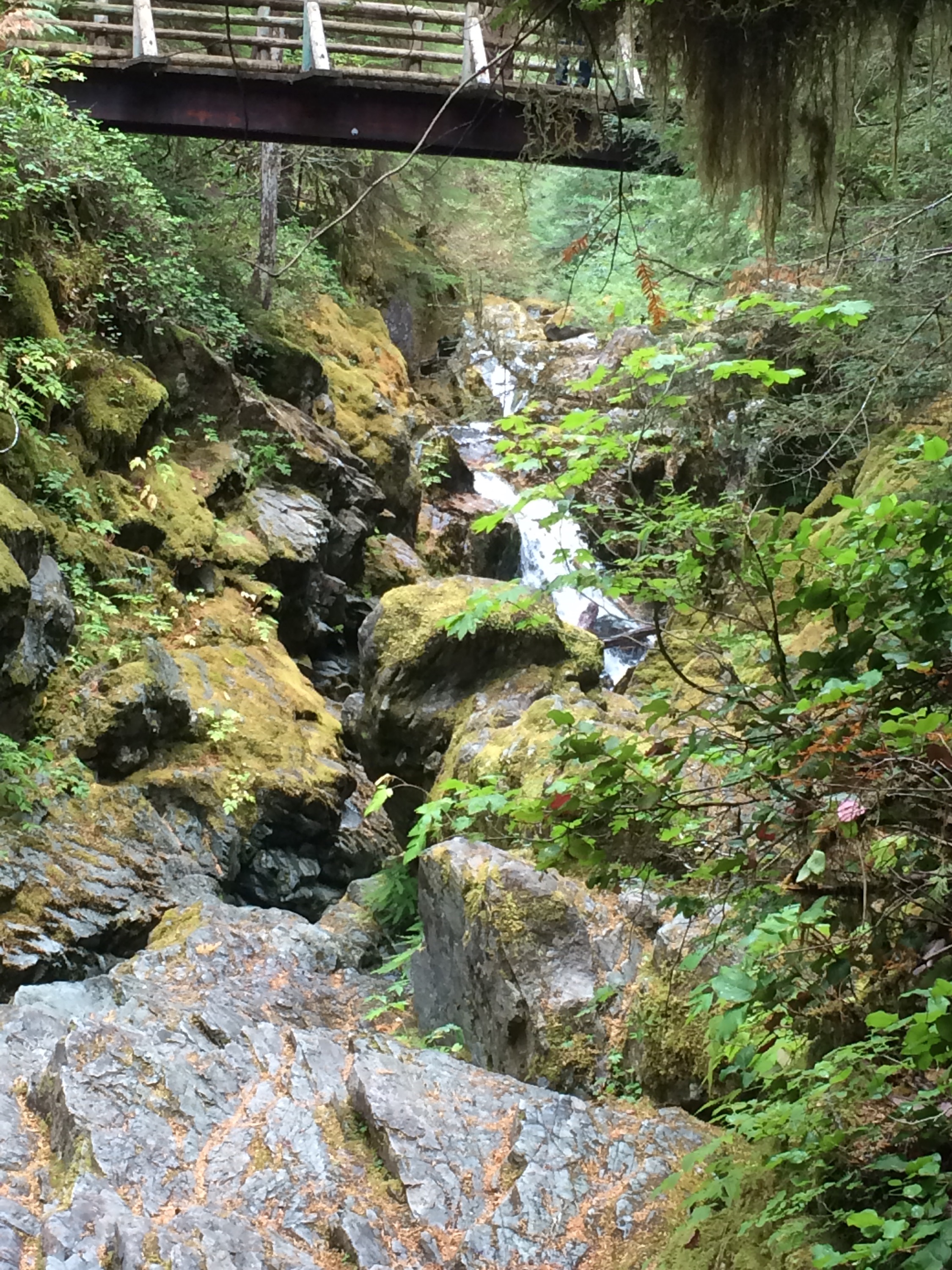 The forest road we walked on to get to the trails had these bridges with spacings in the wood that caused Twitch to slow down and carefully place his feet. The spacings were the perfect size to snag a Twitch foot! So Kris carried him. Twitch was so tired he just hung limply from the harness. Lol I am pretty sure Twitch would have liked someone to carry him the rest of the way by then. 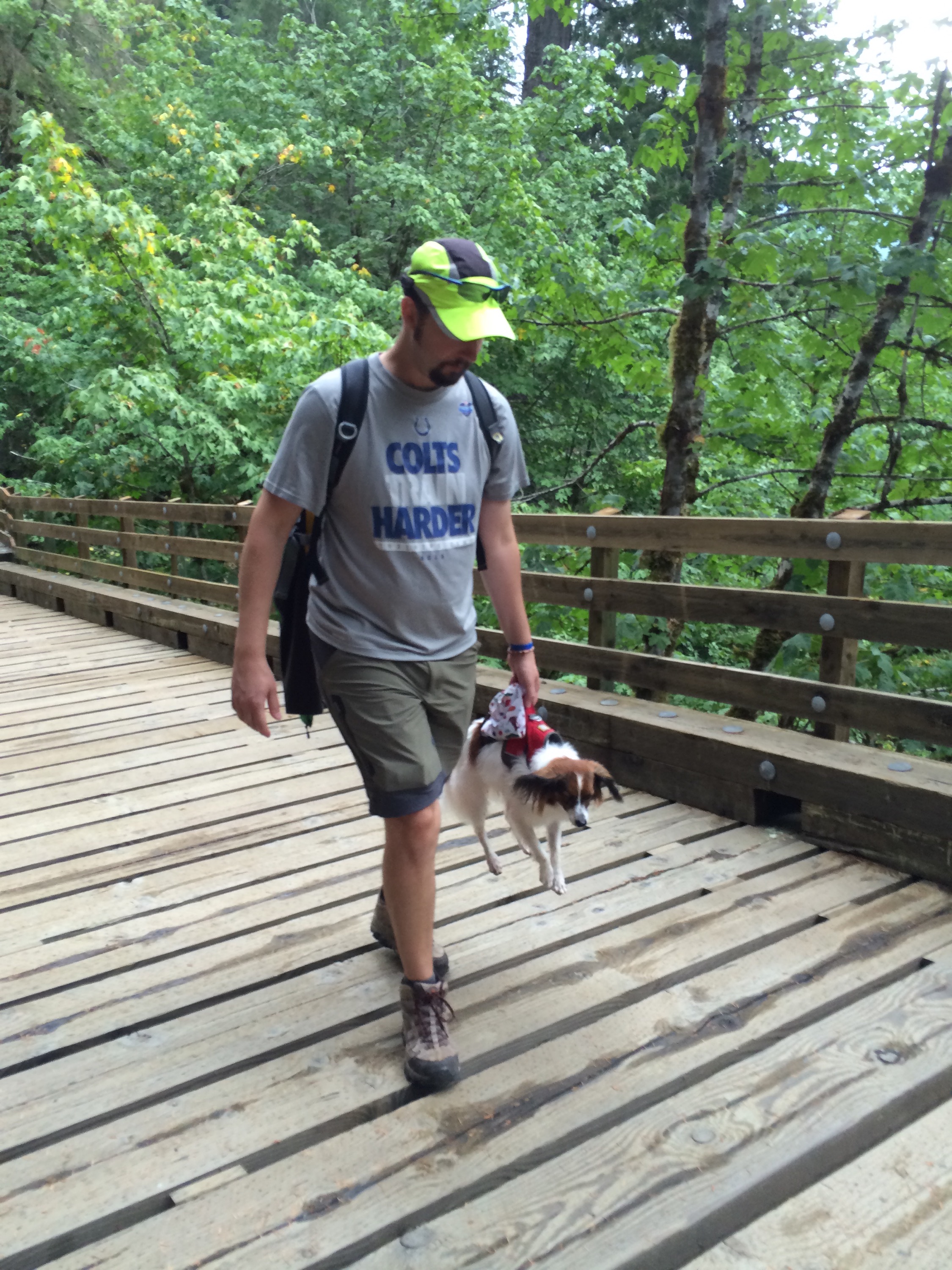 This is old growth forest with large diameter trees that are very tall. 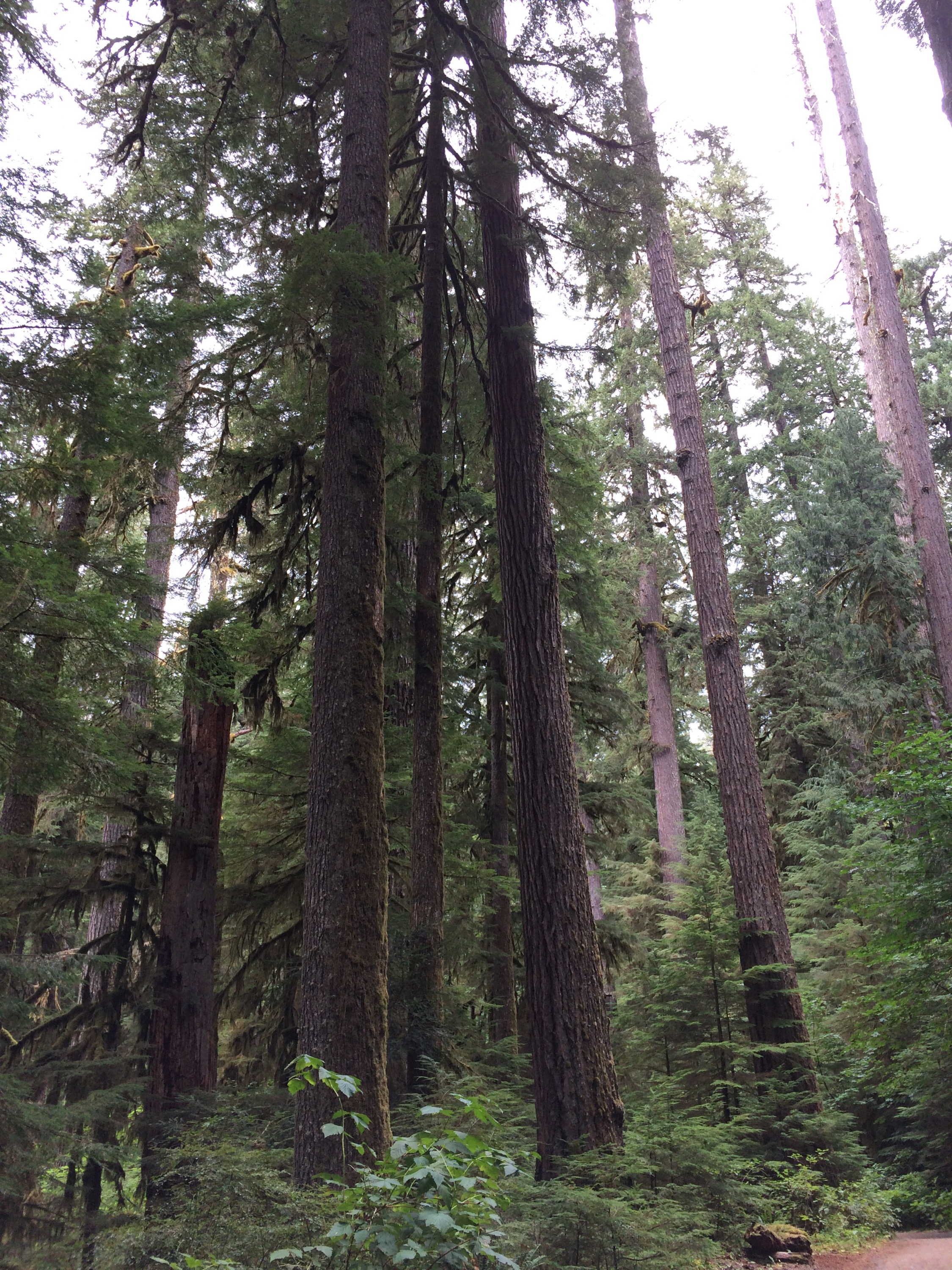 It was a great day, lots of fun and beautiful area! We were on our feet from about 9 am until 3:30. We had the short drive from Three Pools to the Opal Creek trailhead but otherwise we were climbing or walking the whole time. Probably covered 8 miles of rugged terrain that day.

Yesterday Shelby, Kris, our three dogs and I went walking along the almost dry bed of Detroit Lake. We started at Hoover Campground and walked upstream next to the Santiam River which feeds Detroit Lake. 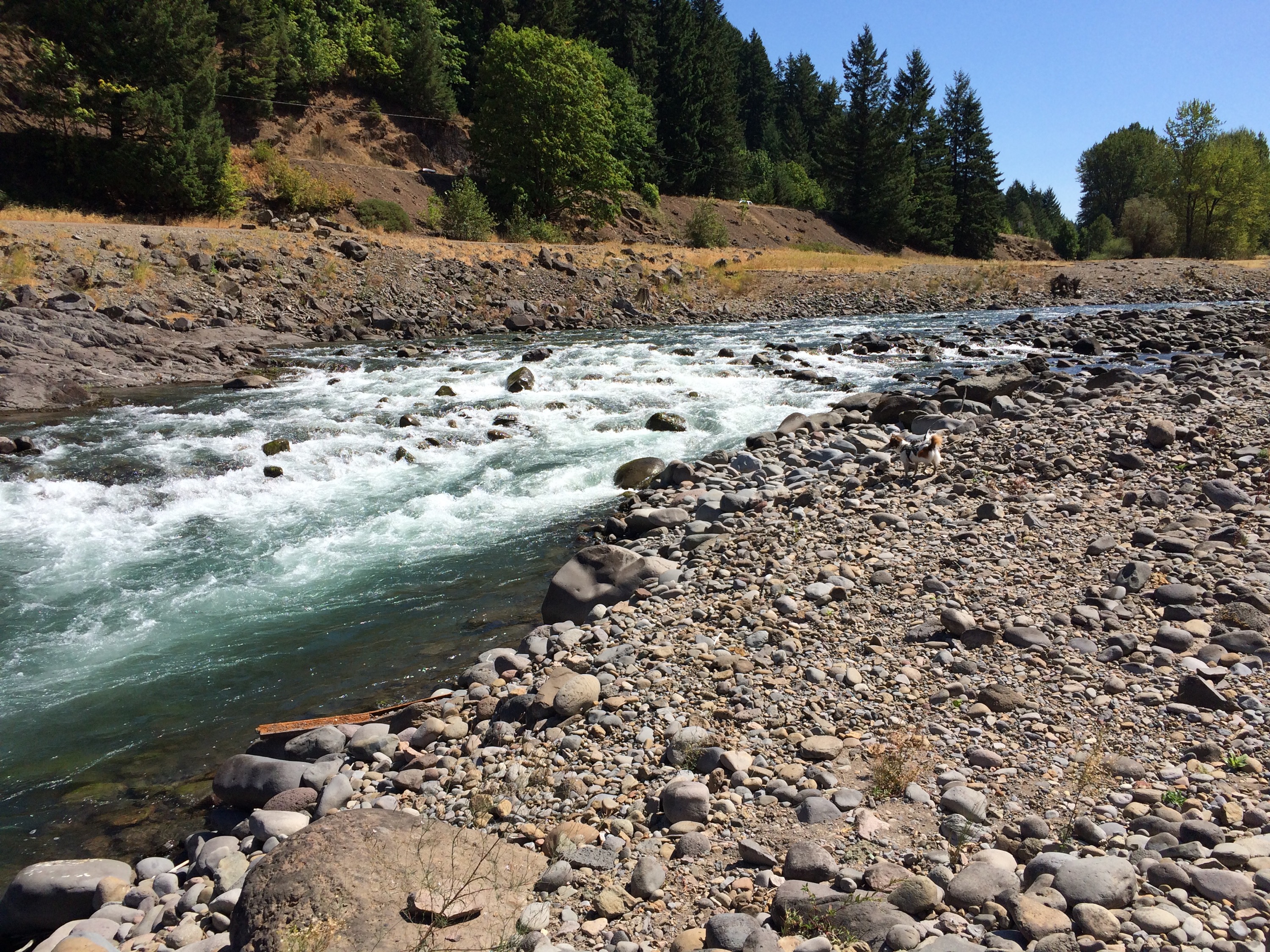 The travel was mostly smoothed cobblestones with some sand as the lake level is extremely low due to lack of rain and snow melt.

Below you can see the bed of Detroit Lake. The post behind Kris is a No Wake sign. 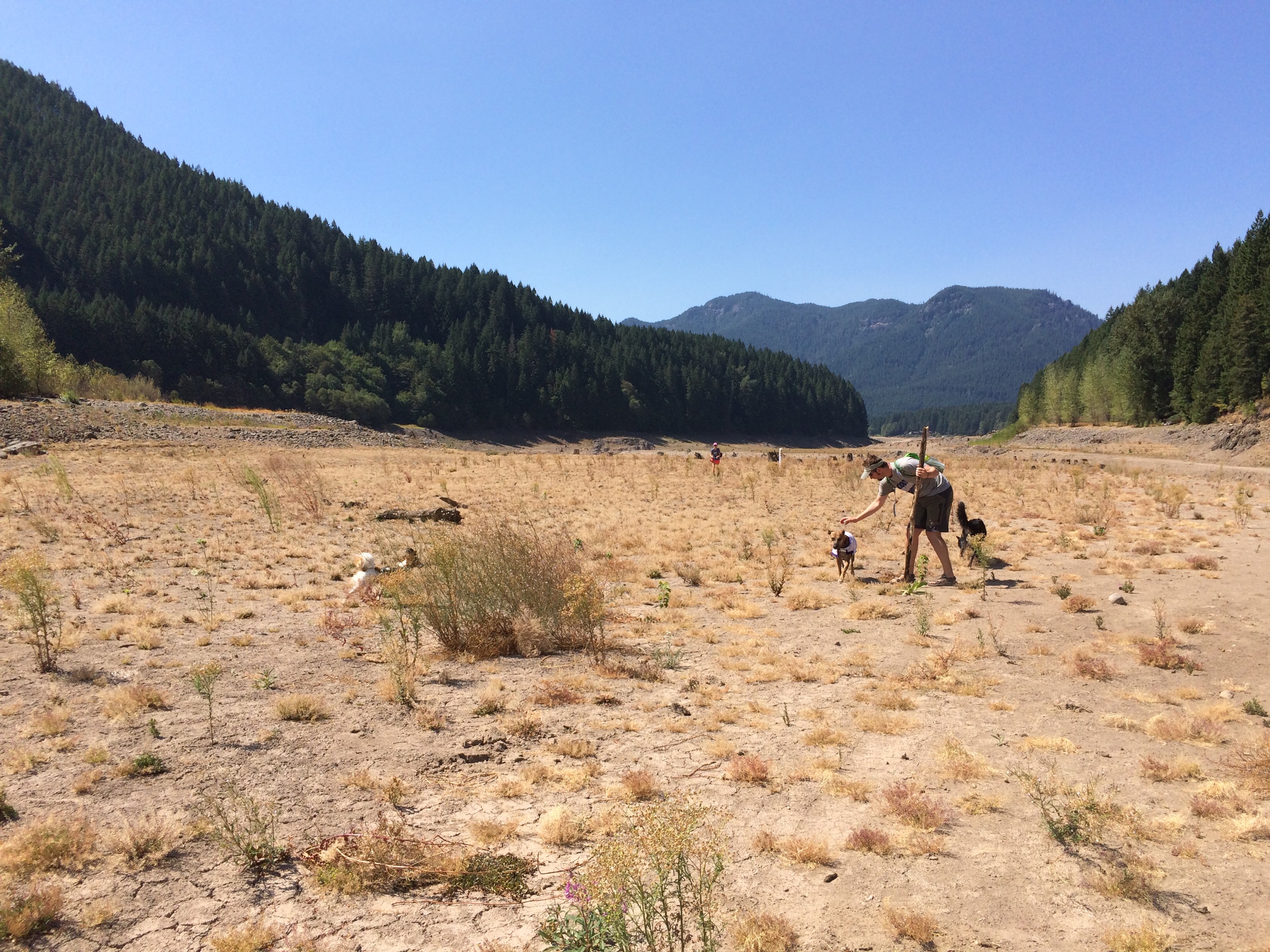 At this point we should be 20 feet underwater. 🙁 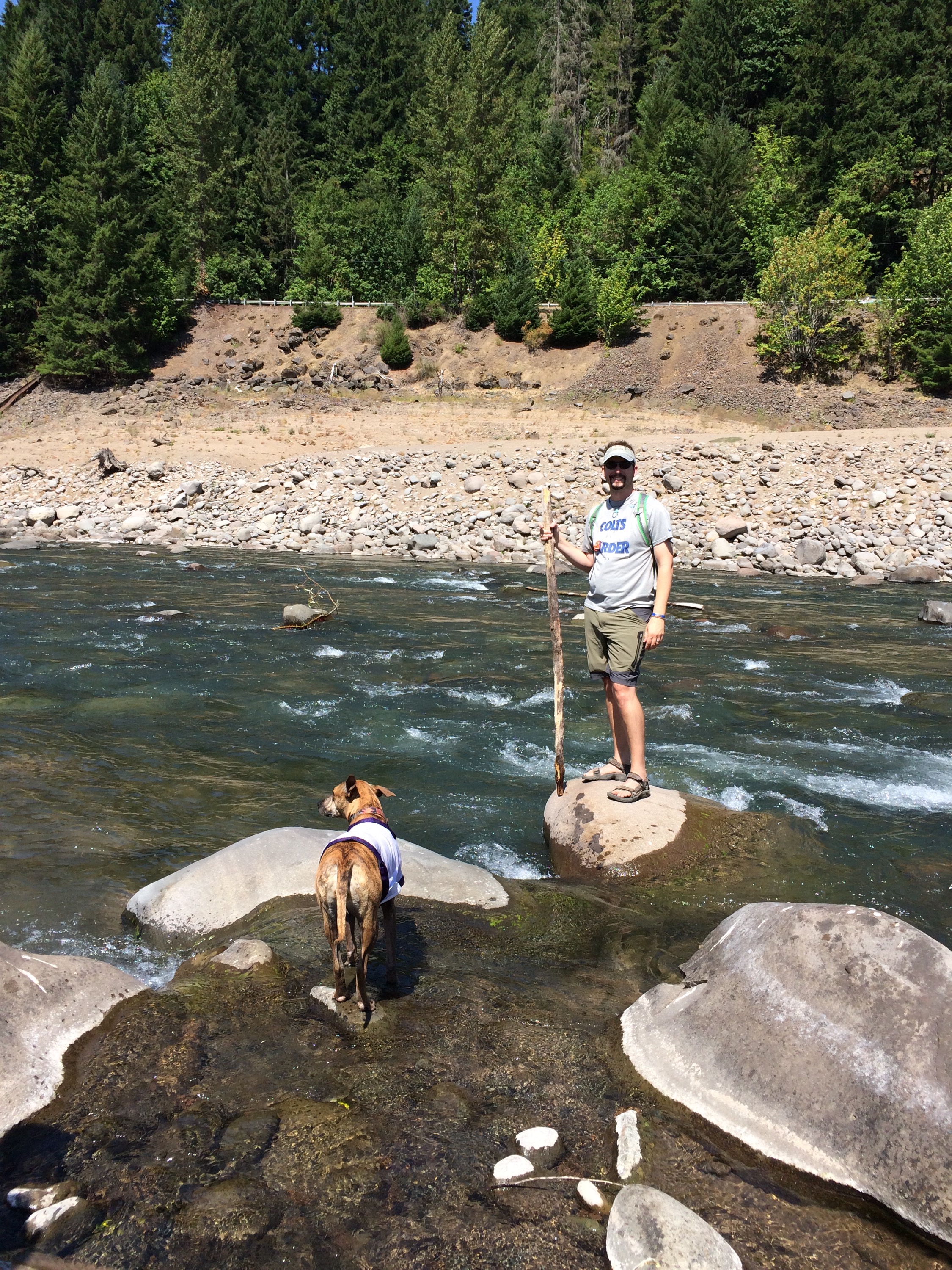 The dogs were allowed to run off leash as we were the only ones out there. When we did see others we leashed until past them. 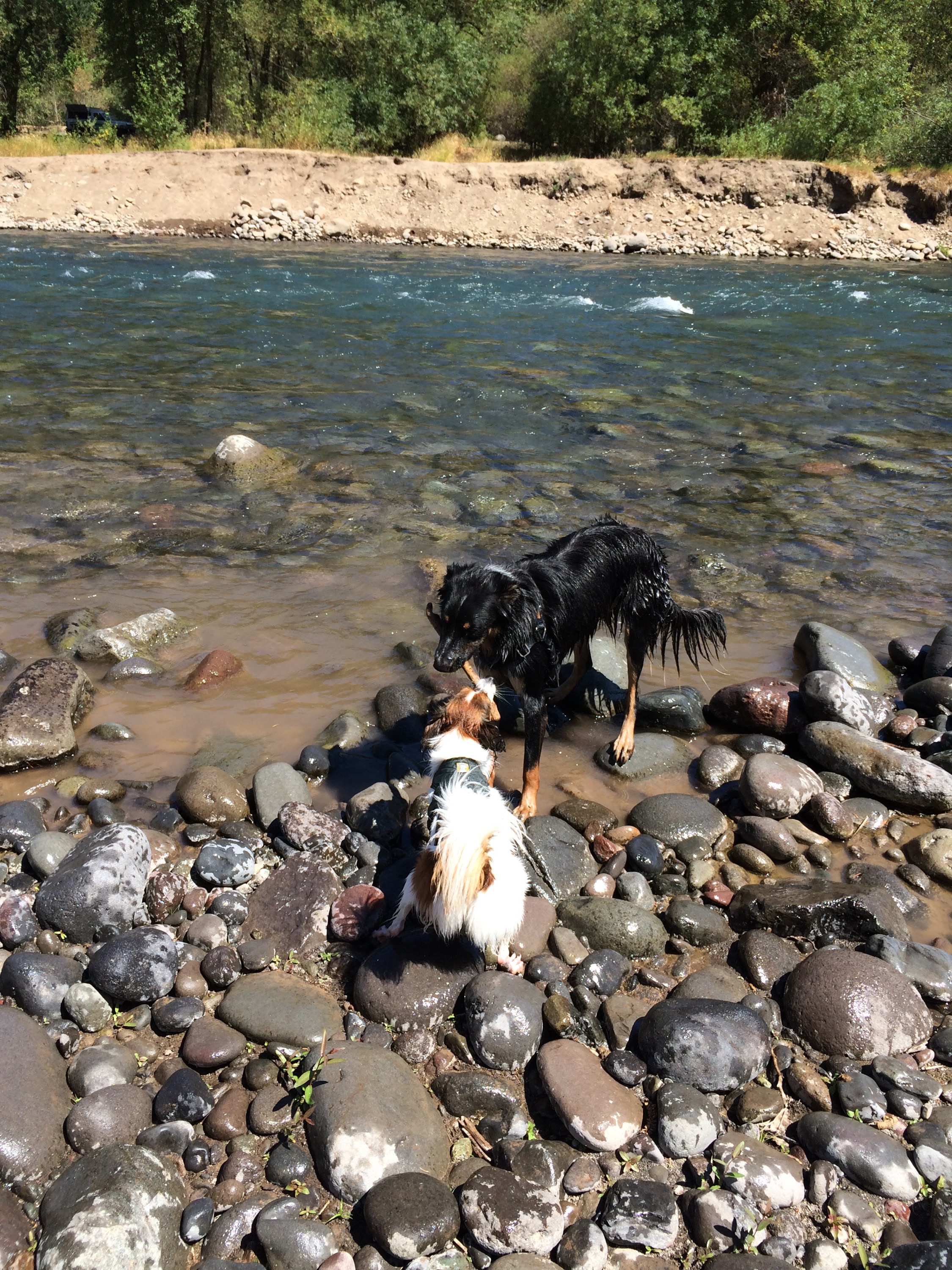 The sheer diversity in the rocks we walked on was amazing. I took pictures of a few for this post. The cobbles ranged from granite to volcanic to sandstone.

These green stones were interesting because most of them were very brittle. They were green all the way through and I have no idea what the composition is.

Here you can see sandstone that was laid down with various layers of a darker material. Most likely due to ash or dust in the sky. Could also be from a flash flood event where this rock was formed higher up a bank or shore where only silt settled out. 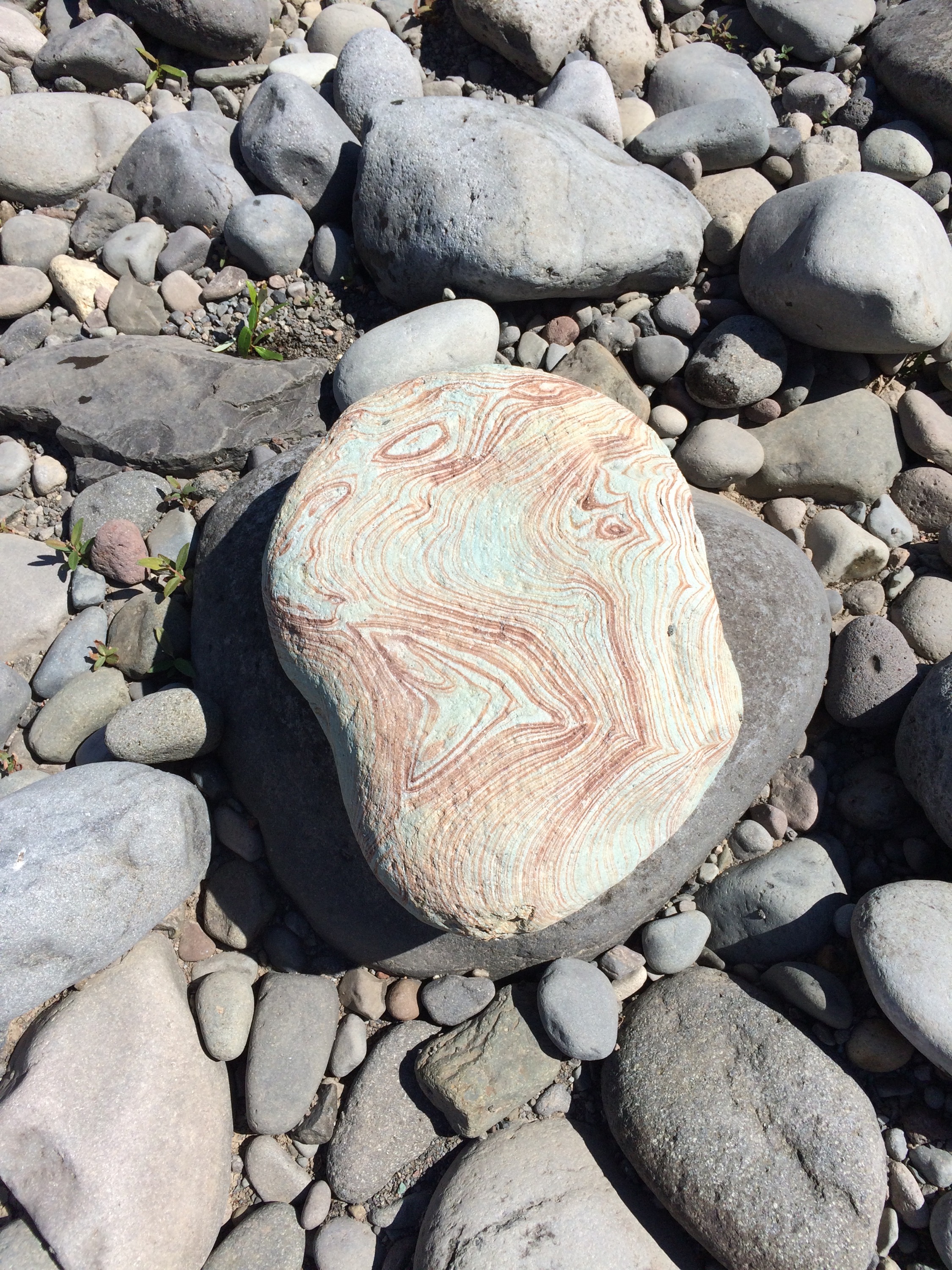 There were also a number of these types where it was a compressed mix of larger pebbles and sand. Very interesting! 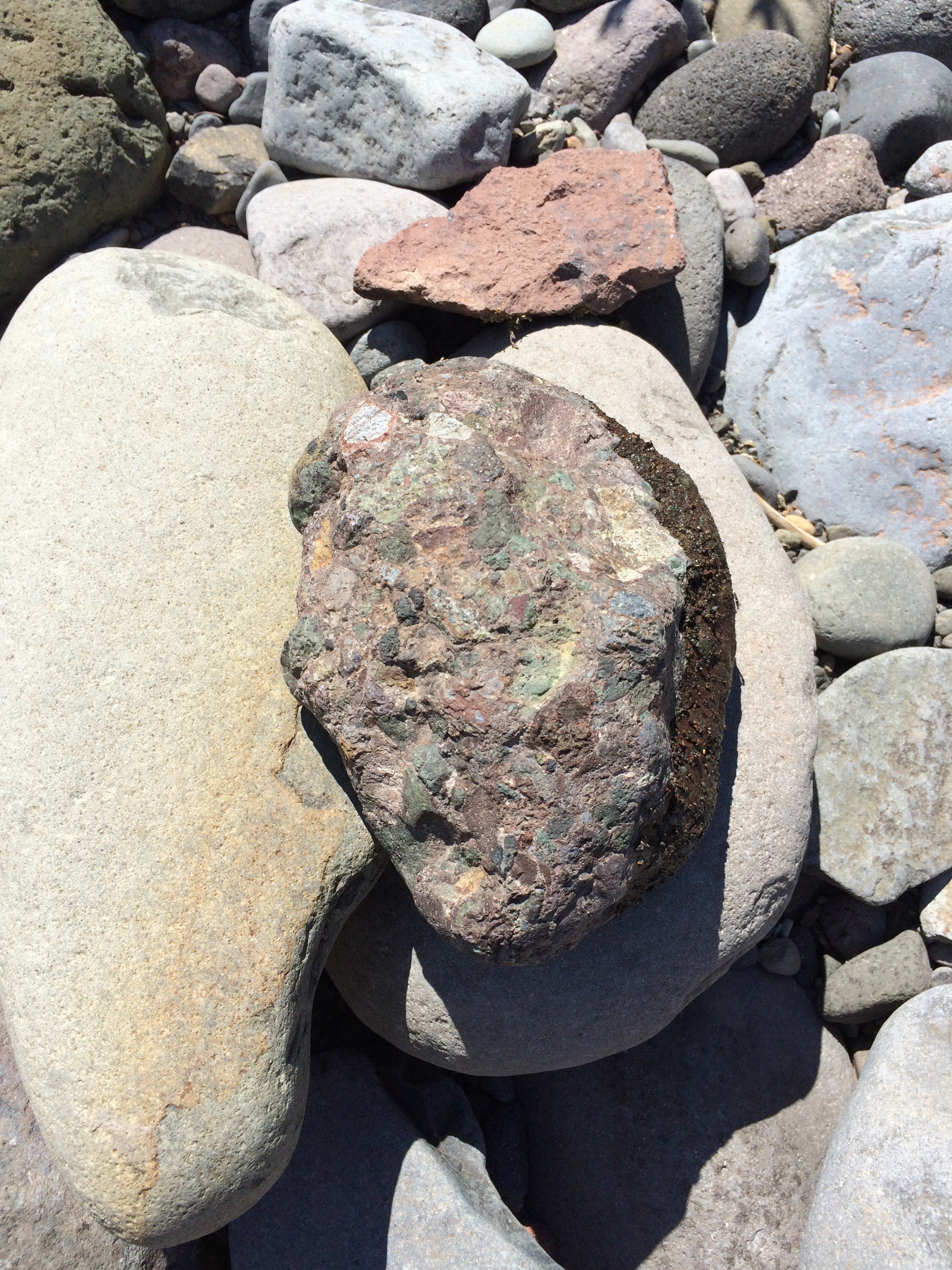 The below conglomerate has bits of granite and sandstone mixed inching you can see at the lower right of the rock as the darker spot. 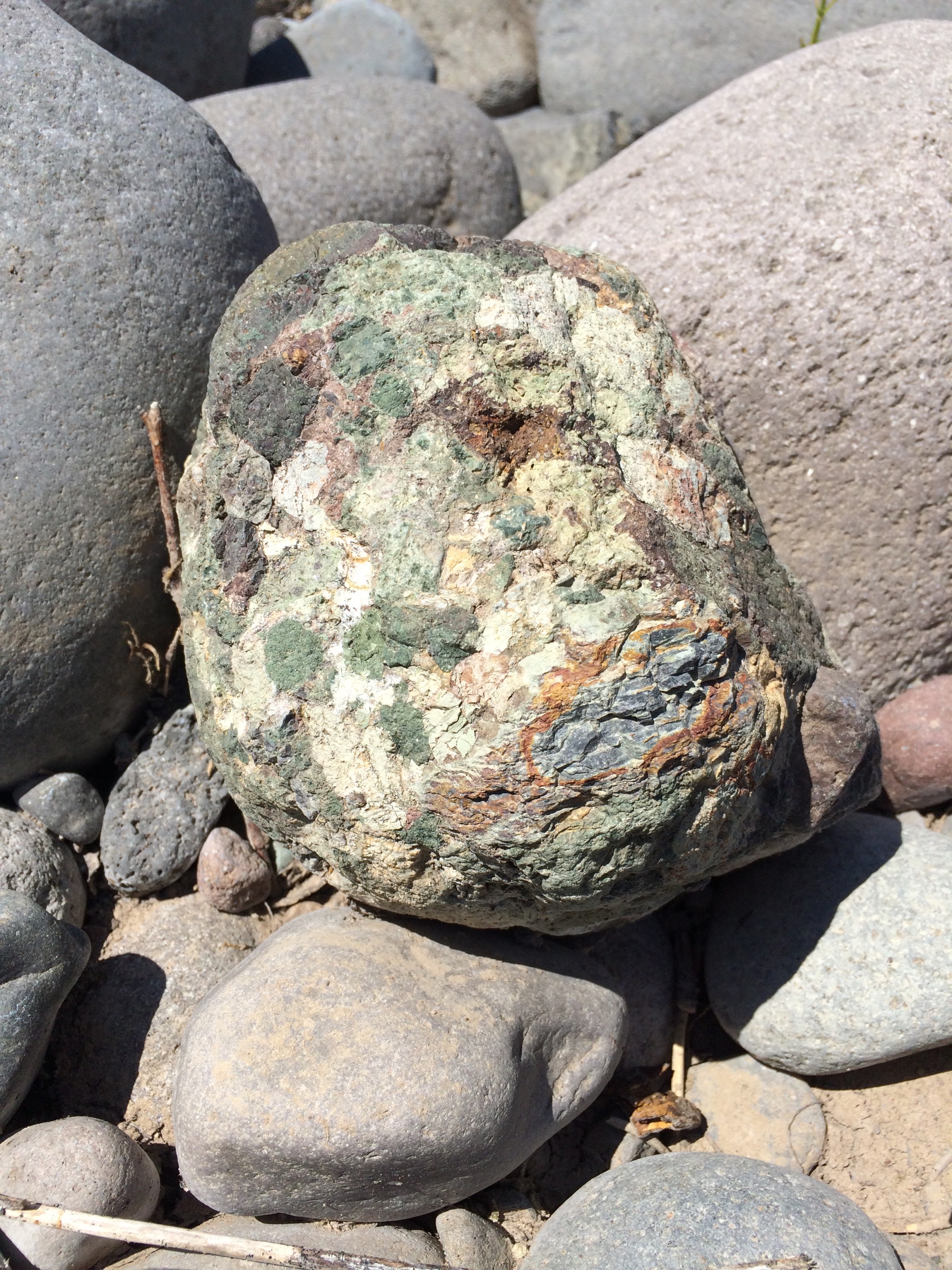 Here is another sandstone rock that had two different colors of sediment compressed into it. There were a number of these out there. 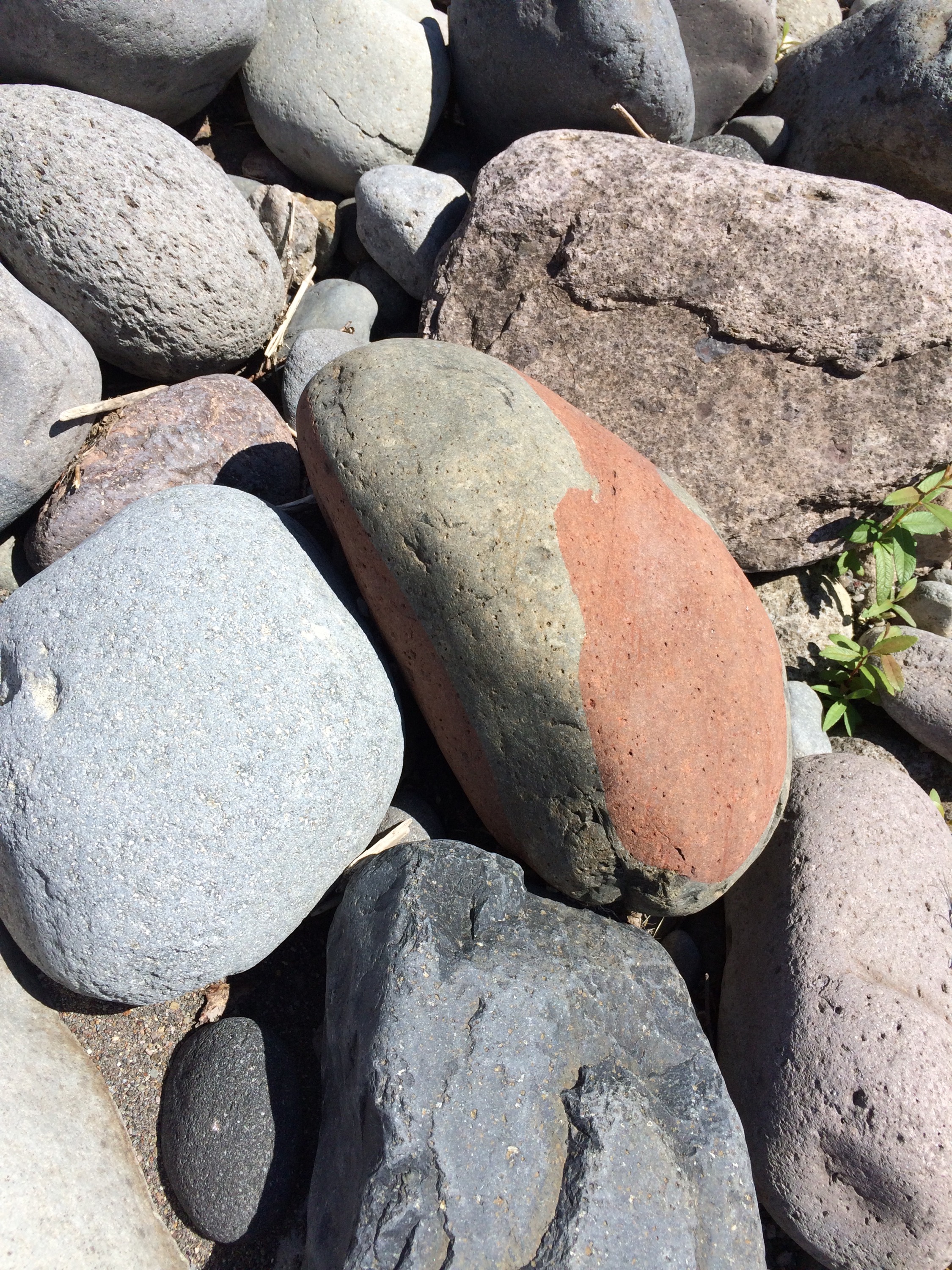